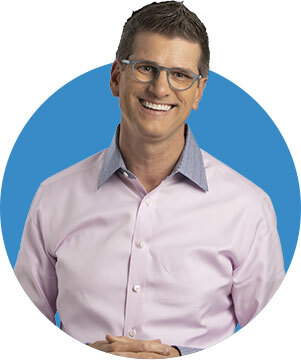 Scott was raised in Central Florida and began his leadership journey early as the student body president of his high school where he fell in love with  politics. After working on numerous local, state, and national political campaigns, Scott joined the Disney Development Company where for nearly four years he was part of the team that designed and built the famed city of Celebration, Florida (Walt Disney’s original vision for EPCOT Center).

At the age of 26, Scott  was kicked out of Disney in Orlando, and moved to the next natural place for a good Catholic boy in his twenties: Provo, Utah. Now at first blush, this might seem  insane, but he fell in love with Utah’s  lack of humidity and joined the FranklinCovey Company.

Recruited by Dr. Stephen R. Covey’s team, Scott built a 26-year career in the world’s most respected and influential leadership development firm serving in nearly every role imaginable. From a front-line salesperson, to project manager, sales leader, general manager, vice president, chief marketing officer to executive vice president of thought leadership, Scott’s experience at FranklinCovey shaped his views on  being a human and somehow found himself married at the age of 41 and  lovingly the father of three  angelic sons.

Scott’s professional roles evolved as he became a multi-bestselling author, radio and podcast host, leadership coach, columnist, and global keynote speaker. He continues to consult with FranklinCovey and is proud to continue their collaboration as he expands his own influence through new books, speeches, and coaching offerings.

Scott currently serves as the Special Advisor on Thought Leadership for the Franklin Covey Company and is the host of their weekly podcast series, On Leadership with Scott Miller. Scott also hosts FranklinCovey’s monthly book club on Bookclub.com which debuted in April 2021. Additionally, Scott is the prolific author of numerous books, writes a column for Inc. Magazine, and keynotes for clients around the world.

The Millers live in Salt Lake City with their two annoying treasured dogs and live every day full of gratitude for all their blessings.